Riding with Juiced: A Special Ride for a Very Special Mom

Like many 16-year-olds, Nico Aguirre enjoys going out on adventures with his brothers, chilling at the beach, playing with other kids, and even riding roller coasters. But the Canyon Country, Calif. resident also happens to be severely disabled, requiring full-time assistance with pretty much everything he does. His mother, Natalia, is his primary caretaker and a single mom. Yes, she gets help from her 14-year-old twins Jeremiah and Isaiah. But the brunt of it falls on her shoulders. And her back – literally.

When he was a baby, Nico was diagnosed with seizures – which in turn caused many developmental delays through the years. “It's been more challenging as he's gotten older, because it's just not as easy to do some of the things that were easier when he was younger,” says Natalia. “Finding activities for all of us to do as a family has also been more challenging. Nico just loves being out and around other people and kids. For example, he likes to get on the bike trails and go to the park where he loves the swings, but he's getting a little too big for them and some of the noises he might make scare other kids. So he requires full care and full assistance for just about everything. Thus, finding activities to do together is challenging.”

One activity that Nico loves to do is ride in a bike trailer while Natalia pedals him around with her mountain bike. “That's one activity we're able to do as a family, is get out on the bike trails,” she says. “We were blessed with a trailer for Nico that goes on the back of my mountain bike. And it's great for flatter, more-level ground. But as he's gotten older, it's also been a little more difficult on my back. There have been times where I've had to cancel trips because it's just the daily caring for a loved one who's bigger and heavier that puts more strain on my back. So there have been times where I wasn't sure I was going to be able to make the full bike ride, and I've had to cancel. I wasn't sure if my bike was going to put too much strain on my back to ride up slopes or just go the distance itself. And Nico's not able to get himself in. He does walk but also needs assistance with balance. So he does need full assistance to get into his trailer. It takes two people and he's getting big.” Which is where Juiced Bikes entered the picture. We heard about Nico’s story and decided to provide a much-needed solution to Natalia – recently gifting the Aguirres a brand-new CrossCurrent X Step-Through electric bike for Christmas. Natalia was shocked at the kindness and is now able to take Nico for rides with her sons but without any of the back strain. She’s been riding much more often now with Nico that she has motor powered-assistance.

“Thank you so much, Juiced,” says Natalia. “Oh my, this is going to be a huge blessing to our family. It's going to bring so many more opportunities to do things with my family and I'm so grateful. Despite all of Nico's challenges, he has an adventurous spirit and loves spending time with his family, riding with his mom, and enjoys a number of water activities. At Juiced, we were overwhelmed by his appetite for adventure – especially after hearing that he loves riding in anything that lets him go fast. “It’s the season of giving,” says Juiced Bikes CEO & Founder Tora Harris. “And when we heard Nico and Natalia’s story, we couldn’t wait to surprise them! We know how much Nico loves riding fast and thought this would be an amazing gift. The CrossCurrent X Step-Through will allow Natalia to keep going on family rides with her boys and not have to suffer physical pain.”

Now that Nico will be able to get out more on family rides, he can also spend more time interacting with other kids – one of his favorite things to do. “It always touches me when other kids come up to say hi to him,” says Natalia. “They are curious and want to know about him. And I just find that a lot of kids are very compassionate and he lights up and loves the attention. And it doesn't happen every day. Being able to be out more now opens opportunities for him just for learning.” 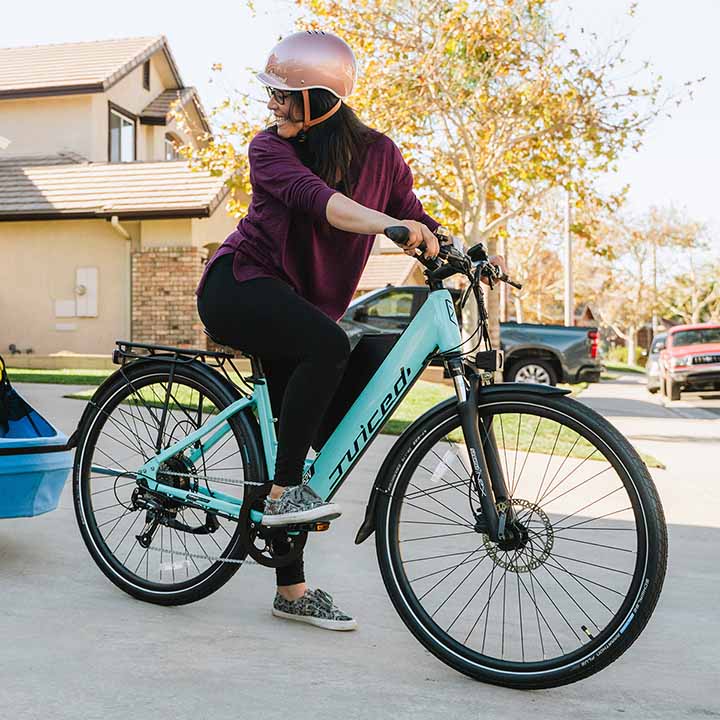 7 Common Mistakes to Avoid When Buying an E-Bike