When Andy Voge celebrated his 32nd birthday with his wife and some close friends, he thought it would be his last.

It was March 2021, and Andy was battling a rare form of cancer called Psuedomyxoma Peritonei (PMP), which created a jelly-like tumor growth in his abdominal cavity. Weeks before his birthday, Andy lay in a hospital bed, where doctors told him he had a 50/50 chance of surviving through the night. He defied those grim odds and recovered enough to go home.

“They told me from that point that I probably had about six months so I went home,” he said. Before his cancer diagnosis, Andy spent his weekdays working as an engineer and his free time woodworking, mountain biking, running, hiking and camping — often with his wife, Rachel, or other family members by his side. But the disease gradually robbed him of those pastimes, in part because he was on artificial nutrition, which drastically reduced his energy level and muscle tone.

Then, around his 32nd birthday, Andy’s brother-in-law, Tim, who he’d often go mountain biking with, introduced Andy to his Juiced HyperScorpion e-bike. The electric motor and throttle gave him the much-needed boost to enjoy biking again.

“It was just terrific to be back on a bike and moving and to be outside. While it was a very different experience than the (mountain bike) riding we were used to riding together, it was amazing in so many new ways. Not least of all it was something I could still do with my quickly fading energy. The e-bike allowed me to pedal when I could but rely on the motor for the times when my strength wasn't enough and eliminate the fear of running out of energy too far from home to get back,” he said. His brother-in-law tagged Juiced Bikes in an Instagram post detailing the experience. The next day, the company gifted Andy with a new e-bike of his own, giving him freedom to enjoy his prior hobbies.

But several months later, Andy received a far greater gift — a lifesaving and revolutionary multi-organ transplant at the Cleveland Clinic. He received a new pancreas, liver, small bowel and stomach in September 2021. It was the first operation of its kind conducted in the United States and replaced his disease-affected organs.

“We have a very long road ahead but today was a good day,” Rachel wrote in a blog post the day after his surgery.

Ultimately, Andy spent 51 days in the hospital, three days pre-transplant and 48 after the complex surgery.

Now, more than a year later, Andy and his wife are back home in their native Minnesota. Their apartment sits next to a county park featuring 30 miles of bike trails. After Juiced donated an e-bike to Andy, he bought another one for his wife. In the warmer months, they frequently hop on their Scorpion e-bikes for an outdoor excursion that isn’t too taxing for Andy, who is still recovering from the multiorgan transplant. “It's great to get out still and not have to put in as much work,” he said.

To celebrate Andy’s heroic journey, Juiced Bikes wanted to give him the opportunity to gift a new e-bike to one of the many family and friends who supported him during his treatment and recovery. He instead asked for an e-bike to be given to another PMP patient, his very generous way of paying it forward.

“It’s a slow-growth cancer and so you just slowly deteriorate over a long period of time, and it’s slowly losing the ability to do things that you enjoy doing,” he said. “I’m really excited that Juiced is able to provide someone else with the ability to regain some of the hobbies, and freedoms, that they’ve lost to this disease.” 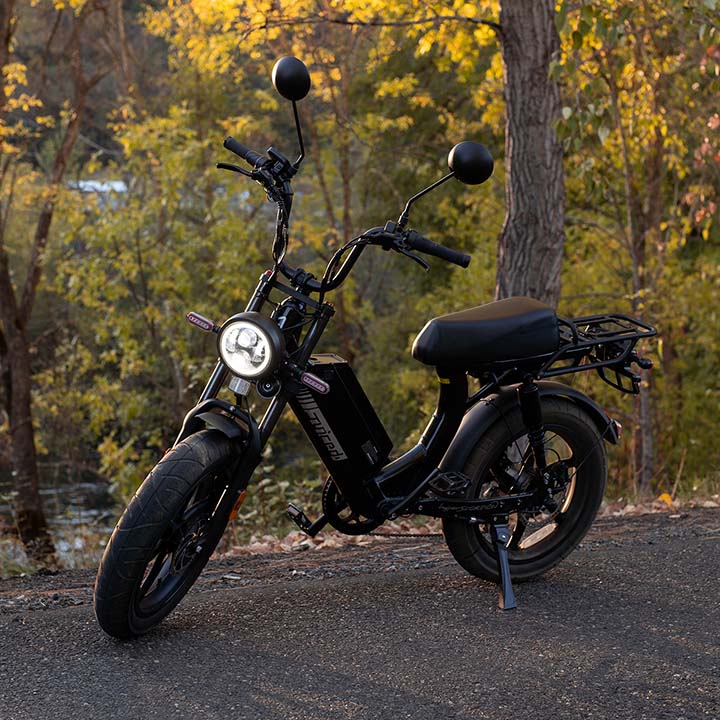