Riding with Juiced: Just What the Doctor Ordered

Ryan McCorkle is perpetually on the go. The Austin doctor practices emergency medicine at St. David’s Medical Center and Austin Emergency Center, doubles as a backstage medical professional, and triples as a doctor for the University of Texas football and Austin FC soccer teams. But it was back in Buffalo during his residency that he got into the habit of commuting to work by bike. “Our local bike shop there had a ‘no such thing as bad weather, just bad gear’ motto,” recalls McCorkle, a father of twin 11-year-old girls. “So I had metal-studded tires and rode in the snow and ice, and just got used to it.” Once he moved to Texas, he tried keeping up the bike commute. But the weather was often so hot that he’d be a “sweaty mess” by the time he arrived at the hospital.

Five years ago, he opted to eliminate that perspiration factor and buy an e-bike. “There weren’t very many e-bikes on the market at that time,” he recalls. “I’d done the research, and knew Juiced was the brand I wanted to go with, as far as being cost-effective and knowing how good the motors, hardware and electronics were.” On a family vacation to California, he arranged a visit to the Juiced headquarters near San Diego. There he took out a now-retired CrossCurrent S model for a test ride, fell in love with it, and had it shipped to his home in Texas. For the 5,000 miles he’s put on it since, he’s generally used the throttle to get to work, and the pedal assist coming home. And he still loves it – although he recently upgraded to the Juiced HyperScorpion, which he’s already ridden 750 miles. McCorkle takes his HyperScorpion everywhere. Not just to work and back.  “I ride it to the backstage medical for all the venues in Downtown Austin, where parking is awful,” says the admitted Pearl Jam fanatic who’s seen the band in concert 78 times. “I can just ride it up to the door, walk in, take care of the artist – they commonly deal with upper respiratory and throat problems – and then be gone. The same goes with UT football. Because I’ve been doing it for so long, they let me ride the bike into the stadium, park it at my aid station, and then ride it out. It’s made a world of difference.”

McCorkle says his e-bike has been unbelievably helpful, in keeping his sanity during the pandemic. “That I get a chance to get out some of the negative energy I experience in the ER before I get home is good for my family life,” he says, revealing he’s e-biked to every work shift since he’s had a Juiced bike – except when it’s rained or when the old bike was in for maintenance. “Austin is a great place to ride around and watch people. I like riding it in our park, where there are great views, and urban riding where I’m always finding new restaurants and food trucks to try, and things like that on the way home. We have a really nice bike path with a curb along the way. And I get to go right through downtown, see all the people, and take it all the way over to the east side where riding is a lot of fun. There are some cool Austin spots to ride around. I take my time. Then when I get home, I’m de-stressed and feel a lot better.”

At the hospital, he stores his HyperScorpion safely in an unused room. Yet some of his co-workers still come by to check it out. Sometimes when they’re getting off their shift, they’ll even ride it around the parking lot. It must be inspiring, as at least one of the other doctors has already bought a Juiced e-bike and several nurses have started biking to work. “It’s caught on pretty well,” says McCorkle. “People ask me about it all the time.” And he’s always happy to oblige.

That level of interest is understandable, especially now that exercising outdoors is so heavily emphasized and encouraged. “Using it to go everywhere gives me some exercise, but most of all it has helped mentally during COVID when things have been hard on everyone – especially healthcare workers,” says McCorkle. “Getting outside, feeling the wind in your face and through your hair, seeing the city before and after shifts, is all such a mood booster and stress reliever.” 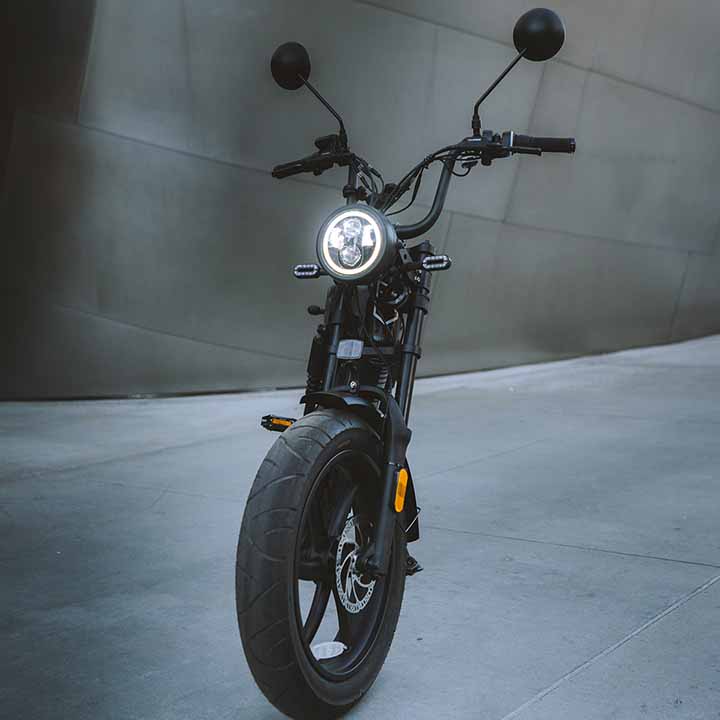