In honor of Father’s Day, we are celebrating one of the dadliest (and most awesome) employees here at Juiced Bikes. Our brand representative, Rich Davis, perfectly embodies the fun, exuberant, sometimes unpredictable, always encouraging, and adventurous qualities that make Dads so incredibly special. He also reminds us that spending quality time with family is one of life’s sweetest gifts.

In true Rich Davis style, he and his family opted to spend this past Thanksgiving with a new tradition. Instead of puttering in a kitchen all day preparing a holiday feast, Davis led his family on a picturesque group ride along the California coastline.

In years past, a lengthy bike excursion may have been equally, if not more, exhausting than a family gathering at home. But, in November, the San Diego-area family members hopped on their Juiced Bikes and hit the road, grabbing sandwiches at their end point and avoiding the hassle of the holiday. No marathon cooking. No post-turkey mess to clean up.

“The whole goal was to make it as effortless as possible,” he says. “So seven of us rode into Oceanside. We cruised the harbor and the beach, it’s a Thanksgiving I will never forget.” An e-bike outing isn’t an unusual circumstance for the Davis clan, though. The electric bike bug bit the family when Davis was talking to Juiced Bikes about joining the company in 2016. He decided to take a rented Juiced e-bike for a spin and invited his daughter and son-in-law to join him in Carlsbad, California. They walked away so impressed with the bikes that Davis set his sights on making the San Diego company his future employer Davis, a brand representative, was Juiced Bikes’ third employee hired.

Now, the 66-year-old and his growing family — which includes his wife, six children and nine grandchildren — own an assortment of Juiced Bikes. Davis says there’s a bike for every personality: moped-style HyperScorpions for he and his wife; a HyperScrambler 2 for his son-in-law who wanted something faster with long-range riding capabilities; and a CrossCurrent X for his daughter who wanted a more traditional-looking bike but with the benefits of an e-bike battery and motor. Their collection of Juiced electric bikes makes family rides possible again. For the most part, Davis’ regular bike had been collecting dust as the years progressed and his children entered adulthood.

“I wouldn’t ride it very much because I live on a hill,” he says. “It was too hard getting up that hill.” That’s no longer the case with his e-bike. Davis says he rides every weekend and usually twice during the work week. Sometimes it’s a quick trip to pick up food or swing by a drug store. Other times it’s the preferred mode of transportation for an evening out. For instance, Davis and his wife recently rode their e-bikes to the movie theater to see “Top Gun: Maverick.”

Since the pandemic, Davis says he has observed e-bike enthusiasm firsthand. Electric bikes now comprise nearly 75 percent of bicycle traffic on some trails, up from less than 20 percent when he first started riding his Juiced bike.

But Davis and his family don’t just use their bikes on short trips near their homes. They regularly bring them along for camping trips to places like the Grand Canyon and Yosemite so they can explore even further than the campsite. During a getaway to Santa Barbara last year, Davis said his family’s e-bike brigade stumbled upon stunning scenery on a single road. “We just kept going and it just got prettier and prettier, (the) further and further we went,” he says. “I’ve never been able to ride that far on a regular bike.”

On those rides, Davis can bask in the wonder of being a father and grandfather — free from all the distractions of everyday life. He encourages other dads to give Juiced Bikes a try, especially if they want to spend more time with their kids.

“If you’re able to do that, it just increases your family time,” he said. “I always look forward to our family bike rides, it gets the kids and grandkids out of the house and we have so many amazing memories from our rides.”

If you’re looking to spoil your dad this Father’s Day, there’s never been a better time to give him the gift of endless riding adventures (and thousands of dollars worth of gas savings) with a new Juiced e-bike. Most models are now in stock and ready to ride into summer. Plus, there’s still time to save an EXTRA $150 off any Juiced Bike with code DAD150. 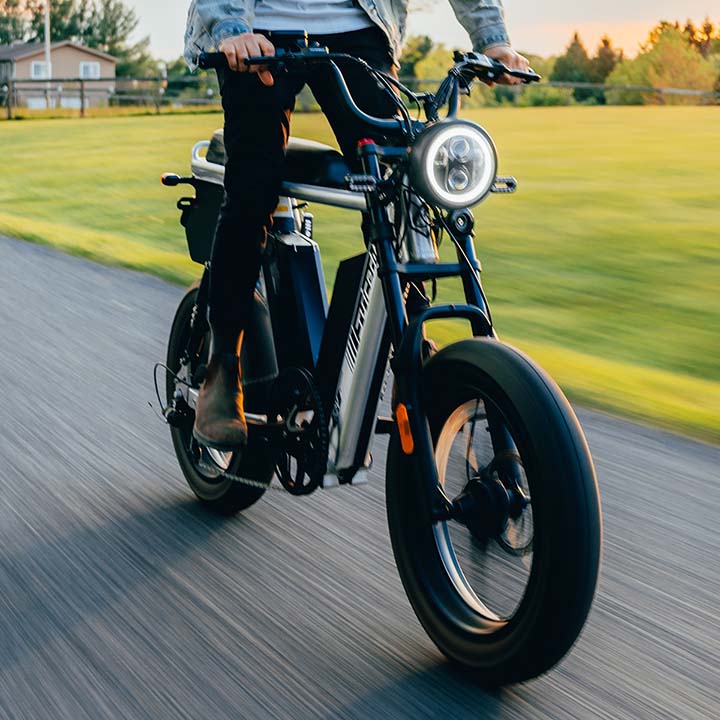