Ever wonder what it might be like to pursue your passion, live on the open road as a full-time RVer and become a successful YouTube sensation with millions of views?

Well, allow us to introduce you to Liz Amazing (yes, she is quite amazing) and her partner Paul Baldassarre. As full-time RVers, they basically live, full-time, on wheels. But, for a week in June, they downsized to two wheels each for an e-bike ride from Pittsburgh to Washington, D.C. Their mode of transportation: Juiced Bikes’ RipCurrent S.

Their 336-mile journey brought them through forests, over the Mason Dixon Line, past the Eastern Continental Divide, and all via rail-to-trail routes without cars. The route cut through the Great Allegheny Passage and then the Chesapeake and Ohio Canal trail system, (GAPCO), giving them a front-row seat to history along the way.

“We never did anything longer than 50 miles,” Paul said. “So we were both a little nervous. We were going to be blazing new territory.”

Paul describes himself as an “avid cyclist,” but it was during his first RV outing that he realized the need for something different. There was no place to ride his regular bike in the hilly campground behind Santa Barbara, California. So he did some research and decided to buy a Juiced Bike.

Eventually, Paul’s path crossed with Liz’s travel plans. Solo RVers at that point, the two met in a Washington state campground in June 2019. Later that year, Liz broke her hand and Paul offered to help her, setting in motion a relationship that would blossom. He bought Liz her first e-bike.

“We are seeing more and more in the campgrounds,” Liz, 59, said. “We definitely think they go well with the RV life. Some of these campgrounds are massive, and this is a great way to scoot around the campground and explore.”

Liz Amazing started her YouTube channel to share all her adventures as a full-time RVer and to inspire other people to live their lives to the fullest. She published her first e-bike video in April 2020, and today it gets upwards of 1,000 views per day as more and more people discover e-bikes.

In her latest video, she showed her viewers how she and Paul conquered the 336-mile GAPCO trail on their Juiced Bikes. They logged 68 miles the first day and 73 miles the second day, riding seven days straight to complete their lofty goal — and credited their electric bikes’ battery performance, power boost and knobby tires with keeping them on track. “Most e-bikes we were riding with (on the trail) could not do the rest of the ride each day and could only do 46-48 miles tops,” Liz says. “These were probably the only e-bikes that could go that far on a single charge.”

On harder days when they encountered torrential downpours and a detour that took them on a muddy path covered with rocks and tree roots, their bikes with fenders and fat tires saved the day.

“Now that we’ve spent so much time, it’s like, wow, these things are great. The bikes really were flawless,” he said.

As full-time RVers Paul & Liz had already ridden their electric bikes in some incredible places. The couple have traversed Glacier National Park in Montana, Trail of the Coeur d’Alenes in Idaho and the George S. Mickelson Trail in South Dakota, among other locations. During a recent visit to the Kentucky Horse Park, they hopped on their own version of a trusty steed — an e-bike — for trips to a farmer’s market and doctors appointment.

He even let a neighbor in the Kentucky Horse Park take an e-bike for a spin. The first-time rider came back with “the biggest smile on his face,” Paul said. He suspects the fellow RVer will be buying an e-bike of his own soon. As for Liz and Paul, they’ve already planned another e-bike adventure — a ride through the Florida Keys in November. They are also planning a much larger bike trip across the country but need to figure out the logistics before embarking on that challenging ride.

“Life is a challenge. I kind of like that,” Paul said. “You push through the stuff that gets in your way.”

Want to challenge yourself this Summer? Whether you’re looking to add some more exercise to your life or tackle a 300+ mile ride like Paul and Liz, Juiced has you covered. Take our e-bike quiz to find the perfect ride for your needs. And don’t miss out – Prime Savings end tomorrow with up to $300 off your favorite Juiced Bike. 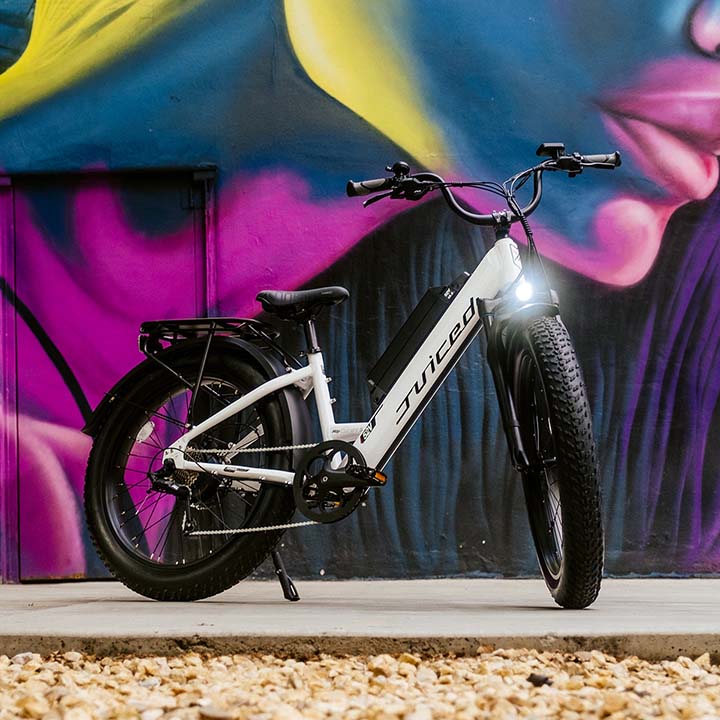 The CEO Interview: Looking Back on More than a Decade in the E-Bike Industry

Prepping for a Recession with an E-Bike