The CEO Interview with Tora Harris

Let’s start at the beginning. What is the ‘origin story’ of Juiced Bikes?

My story started basically in college. I was an athlete at Princeton University and suffered a stress fracture in my foot in early 2000. They gave me an electric golf cart to get around campus and to go to physical therapy. And, that's when I first realized, wow, this electric thing is really cool. You just plug it in overnight, you never have to let it warm up, and it just goes. Fast forward to after college. I went to Europe for training and  competition. It was in Holland where I was riding a bicycle around for months and months. I never drove a car over there, and it further opened my mind. I came back to the United States and realized everyone heavily relies on their cars. In 2006, I started training at the San Diego Olympic Training Center in Chula Vista. We then had that fuel crisis in 2007 and 2008, when we paid like $5 per gallon for gas, and everybody was going out and buying scooters, bicycles and roller skates.

I had been going to China quite a bit because they hosted the 2008 Olympic Games, so they were hosting events leading up to that. There were no electric bikes there in 2001, but if you went back around 2004, everybody had electric bikes. It was like overnight -- primarily because of the SARS virus. That was when electric bikes took off in China, because you couldn’t ride the bus or public transportation, and there was really no way to get around. Fast forward to 2009, that’s when this company started. At that time, there weren’t many e-bikes and the bicycle industry rejected them. Because I had an engineering background, my main focus was importing battery packs for electric bikes. Later on, we started making the full bike, as we realized people don't really want to do DIY -- they just wanted to buy a full bike. But back then, it wasn't clear that people wanted e-bikes here  in the U.S.. It was a very slow start, but has  really picked up in the last few years.

What’s most surprising about starting & building your own business?

What’s surprised me most about the e-bike industry has been dealing with multiple layers of things, stacked on top of each other. One is being an entrepreneur dealing with starting a business.That's been challenging. Layered on top of that you have international trade and on top of that you have this boom in business. Then you have this relationship between the dealer network and online sales. So all those things are quite surprising and challenging to work with all at the same time.

What is the most gratifying/fulfilling part of your work?

The thing that satisfies me most is when someone buys our product, uses it, loves it, and then becomes an evangelist for the brand and then encourages other people to start riding our e-bikes other. To me it's like, WOW, this is really great and it’s changing people's lives. Maybe they previously were unable to ride up a certain hill, so they wouldn't ride traditional bikes. Now suddenly they bought a product that can be used  to reclaim lost mobility, or just to experience the joy of riding a bike without the typical headaches of bike riding. The greatest thing is offering riders a chance to be more mobile and explore with greater confidence, and less worry about making it back home. How involved are you in the day-to-day operations of the company today﻿?

I’m involved in every part of the business, which is pretty unique. I don't know any other way to operate. At one point, the company was just me in a roll-up storage unit. I played all of the roles. Then the company grew. In some cases, I trained people to take over some of my work. In other cases, I was able to add people that are truly experts in their fields. Handing these responsibilities off allows for additional growth, which is what we need right now.  But there are still parts of the business where I can observe and see opportunities for improvement. So when employees are doing their thing, I can put some context to what they're doing. I  like to be involved with getting the best possible product developed and produced, and delivering the best possible customer experience.

What worries you most, what keeps you up at night?

Well, I’m not a great sleeper so I stay up most nights working. Work more, worry less! Seriously, though, there are a lot of challenges in the e-bike market right now. The tariffs have definitely disrupted business and negatively impacted consumers. Increasing our e-bike prices to mitigate some of the resulting financial damage was a really hard decision to make, and I hate that consumers are paying more because of the tariffs. Also, post-pandemic there are new supply chain challenges and disruptions, so just getting inventory here has been an enormous battle. There are container shortages in China, port delays in Southern California, and serious material and component scarcity pretty much around the world. I’m optimistic these constraints will be temporary and the market will evolve in a more positive direction as a result.

What keeps you motivated?

I really want to create a great product that puts a smile on the faces of our customers. I want to continue to WOW people. Customers will buy and ride our bikes, and then make suggestions on making an even better product I think ‘we can do that’ and then we WOW them again. That is really the driving force.

What’s on the horizon for Juiced Bikes?

Of course we’re all working on the 10-year roadmap. When the pandemic hit, everyone was thinking their business was going to stop and nobody would go anywhere. It turned out to be the absolute opposite. It’s been incredible to keep up with the changing environment during the pandemic and now as we enter into a ‘new normal’ post-pandemic. Product innovation is a critical part of how we manage through these changes. One of the unique things about our company is the unrelenting focus on product development. If you follow the industry, you'll see everybody is pushing boundaries. Considering our size, what we’re doing is really out on the forefront. I think it's very interesting what's going to happen in the future.

Our original electric bike was a cargo bike with 20-inch wheels and a big battery. Then we progressed the batteries over time to get more range, and that put us way ahead of most other e-bike brands. Everybody is interested in the range, the motor power that's clamped to a certain extent, cargo capability. We were so far ahead of the market, but now you’re starting to see the 20-inch wheel platform come back as cargo companies have produced these products. Sometimes being too far in front is challenging because you're riding the bicycle race and breaking the wind for everyone. What do you say to critics that complain about e-bike safety?

For better or worse, e-bikes are really fun. People do some things on them that are not necessarily safe. Electric bike safety and education needs to be better -- the rules of how these should operate. We’ve invested our resources to create safety-related content, and we’ll continue to promote the basics of safe riding. E-bikes also need to become more mainstream, where there's less of this desire to do dangerous things on them. Electric Bikes are fairly new here in the U.S. market and people are still figuring them out. Remember when people had Pokemon Go on their phones and were running into the streets? Nobody's doing it now. It's just the novelty of it, but eventually everybody, over a certain age, will have been on an electric bike and will be riding safely and comfortably.

With all of the e-bike brands available now, why does a customer pick Juiced?

In this market, it’s really the passion we have for the product. And our riders understand and appreciate that. Right now, we are in the low-hanging fruit period. People are buying their first electric bike, and they are thrilled with them. But then, customers start wanting more… more speed, more power, more riding range, more fluid pedal assist (torque sensors). Basically more of the proverbial ‘bells and whistles’. This is where Juiced enters the picture. Our e-bikes have all of the upgraded components, like a massive battery, big motor, advanced pedal assist. We’re basically offering an electric bike that might cost $4,000 - $5,000 at a bike shop for about half of that price. Consumers understand and appreciate the value,  and become advocates for the brand.

I definitely don't work out at a professional level of fitness anymore. It’s very strenuous on your body. To be honest, I can’t even go into the gym. I need a target to train for. I can't just train aimlessly anymore. It's like getting in your car and just driving in circles. I need to have a position -- and a target date where I am going to be at my peak performance. That is how I did it for 20 years.  Now, I focus all of that energy on our business goals. That’s the target I’m training for! 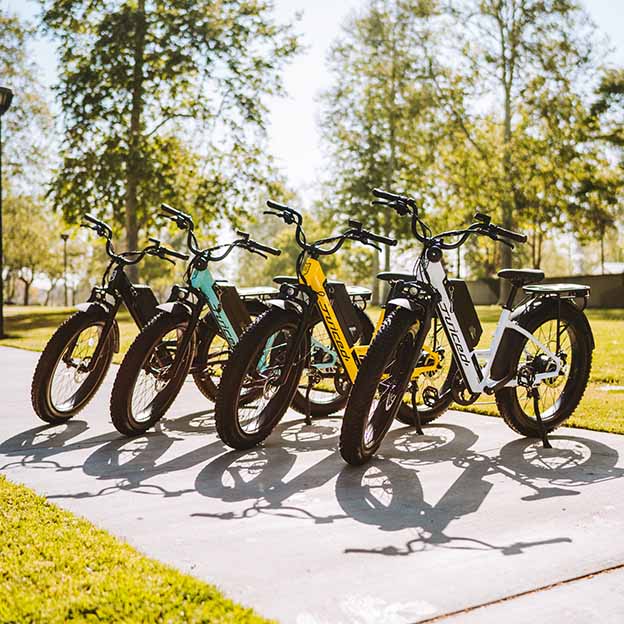 Celebrate Bike to Work Week with a Juiced Rider Who Bikes to Work EVERY DAY!

7 Things Riders Wish They Knew Before Buying an Electric Bike