How Many Calories Can You Burn on an Electric Bike?

All electric bike riders have heard it before - “riding an ebike is cheating!”. Some proudly agree with this criticism while others rightfully defend themselves. How is riding an electric bike cheating? Electrically assisted bikes still have the same benefits as traditional bikes by raising your heart rate, providing interval training, and you can still burn hundreds of calories per hour. In fact, here at Juiced, we put this myth to the test and the amount of calories burned during an electric adventure might astound you.

To test how many calories are burned during an electric bike ride we needed a few devices. Amongst our tools were one Juiced electric bike, a heart rate monitor in the form of an Apple Watch, and a willing rider. Armed with a brand new RipCurrent S: Step-Through on pedal assist 2 on hilly terrain, our rider tracked their activity for 45 minutes to calculate calories burned. At the end of the ride a total of 498 calories were burned with an average heart rate of 106 beats per minute. These statistics are pretty encouraging for those looking to add some physical activity to their routines. According to fitness guru Brooke Taylor for CNet the average person should burn 400-500 calories per workout five times a week in order to improve their health and lose weight. Seeing as many electric bike riders take their wheels out casually, it is likely that riders are achieving improved overall health and a decrease in their waist size without even realizing they’re working out!

Comparatively, someone with similar statistics to our rider could burn an equivalent amount of calories from more traditional exercises. 30 minutes of running at a 9mph pace could burn 488 calories according to Livestrong.org while 30 minutes of weight training would burn around 400 calories according to cornell.edu. Less intense physical activity such as 45 minutes of tennis or hiking results in a calorie loss of 350 according to cornell.edu. When seeing the results from our rider’s 45 minute electric bike ride, it’s clear that an e-bike workout is not taking the easy way out.

People assume riding an electric bike is cheating because it's a much easier way to ride, which is actually why so many are choosing to ride e-bikes. Riders can determine their intensity level on an electric bike. Among fitness buffs, there is some debate about whether intensity OR duration of a workout is more beneficial, but experts agree that BOTH types of workouts burn fat and calories. Electric bikes provide a low impact exercise which allows riders to workout for longer periods of time than they would on a traditional bicycle. Sure, more calories could be burned on a fixed gear bike during a potentially shorter ride, but a heart rate that is elevated for a longer period of time can provide comparable fitness benefits. According to Treehugger.com riders increased their miles per day from 1.3 miles to 5.7 miles when making the switch to electric. E-bike riders note they have explored further regions of their local neighbor than they ever possibly could have on a regular bike due to personal limitations such as injuries or dexterity. Thus still raising their heart rate for a longer duration.

Electric bikes can be easily incorporated into your daily routine to help make mundane tasks a calorie burning adventure. A 20 minute ride to the grocery store on our HyperScorpion Express cargo bike totals up to 40 minutes of exercise while accomplishing a task most would have previously used their car to complete. Commuting to work 30 minutes on our CrossCurrent X commuter bike would total up to an hour of exercise a day, which on an electric bike, doesn’t really feel like exercise.

It’s clear from a myriad of scientific data and evidence electric bikes are not cheating. The increase in heart rate and calories burned are clear proof, and can shut down those pesky e-bike naysayers. Someone looking to improve their physical health should consider an electric bike as a means to exercise without the dread that comes with most traditional exercises. E-bikes are easy to incorporate into one’s lifestyle while allowing them to make the healthy choice in how they commute or tackle weekly chores. Will riding an electric bike get you totally ripped? Not likely - but it will help you burn a ton of calories and drop some pounds all while having a blast. 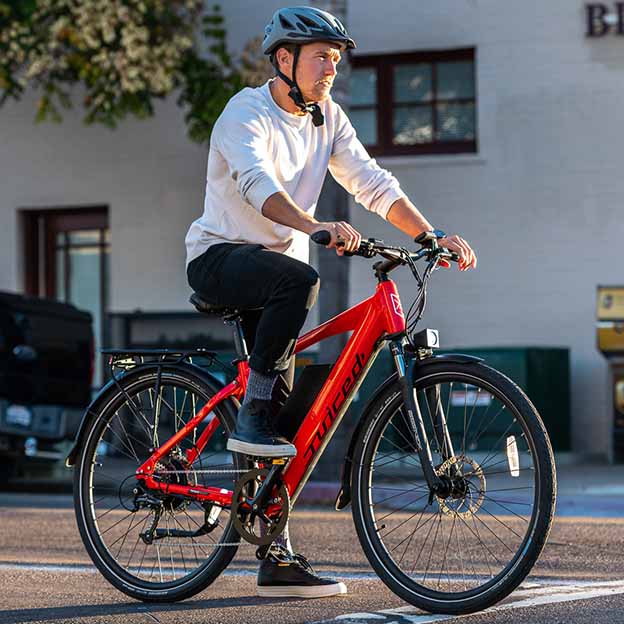 How to Gift Wrap an Electric Bike