E-bike definitions and classifications are becoming increasingly common across the U.S. All fifty states and Washington, D.C. currently have definitions for e-bikes. While 36 states now define e-bikes within three standard classes, others use non-tiered e-bike categorization. State legislation usually focuses on whether e-bikes classify as scooters, mopeds or traditional bikes, but definitions vary across states. If you're shopping for an e-bike, it’s important to understand the e-bike laws in your state, as they may be slightly different than the popular 3-classification system. Here’s the ultimate state-by-state guide on e-bike regulations. The number of U.S. states adopting a broad-tiered classification system is growing. All of these states designate e-bikes based on a three-class system, so each bike could be Class 1, 2 or 3. Class 1 and 2 e-bikes are better suited for riders who enjoy recreational activities such as exploring the outdoors, hunting or mountain biking. Class 3 electric bikes are well-suited to urban road use and can generally replace a motorcycle or moped. All Juiced Bikes can be classified as Class 2 or Class 3 e-bikes.

The tiered system of e-bike regulations recognizes that e-bikes span a wide gap between dirt bikes and analog bikes and differentiate between models with varying power and speed capabilities. States that use the three-tiered e-bike classification system have almost identical e-bike operation and safety requirements and similar definitions for e-bikes. Fourteen states in the U.S. use unique definitions to classify e-bikes but don't use the three-class system. In some states, like New Mexico, that means e-bikes are treated exactly the same as traditional bikes. In other states, like Massachusetts, it means there  are no e-bike classifications, but other important regulations for e-bike riding. If you live in one of these states, it's important for you to research local laws before riding. Those non-tiered states include:

Alaska defines e-bikes as "motor-driven cycles" and require a license to ride, though the state does not currently require registration or insurance. There is no helmet requirement for e-bikes but there is an age requirement of 14. Electric bikes are prohibited on public sidewalks and bike trails.

E-bikes are defined as bicycles in Delaware as long as the bike has operable pedals, a maximum speed of 20mph and a motor under 750 watts. Electric bicycles are allowed on bike paths and sidewalks, and there is no age minimum for e-bike use. The same rules apply to both human-powered bicycles and e-bikes.

In Hawaii, e-bikes are defined as mopeds, and helmets are necessary for operators under 18. E-bike riders are subject to registration documents and must carry an operator's license.

E-bikes are prohibited on interstates and county highways but are permitted on city streets and bike paths.

In Kentucky, the same rules of the road apply to both human-powered bicycles and electric bicycles. E-bikes are allowed on bike paths and sidewalks.

E-bikes are defined as "motorized bicycles" in the state of Massachusetts as long as the max speed is 25mph or less. Massachusetts requires e-bike riders to have a license as well as registration for the bike, but does not require insurance. Helmets are required by law and the minimum age to ride an e-bike is 16. Massachusetts also does not allow e-bikes to be ridden on public sidewalks or bike paths.

You may ride e-bikes when on bicycle paths and roadways in Montana. They are defined as bicycles with two operational pedals with a motor attached. E-bikes must not reach speeds greater than 20mph or have riders who weigh more than 170 pounds.

In Nebraska, e-bike riders have no age minimum and are not required to wear helmets. E-bikes are allowed on bike paths and sidewalks.

New Mexico defines e-bikes as "mopeds", meaning riders are required to have license and insurance. The minimum age for e-bike riders in New Mexico is 15. E-bikes are not allowed on public sidewalks in New Mexico, but their use on bike paths is not determined at a state level. Riders are encouraged to contact their local governments for information regarding e-bike usage on designated bike paths.

E-bikes can be ridden on all roadways and public highways with a speed limit of less than 25mph, on bike paths, in bike lanes and on sidewalks.

Operators of electric bikes must yield to human-powered devices and pedestrians.

In Oregon, electric bicycles must be designed for ground operation with wheels. The motor cannot propel the bike more than 20mph on level ground and cannot have an output above 1,000 watts.

E-bike operation on public roads in Pennsylvania is allowed under the following conditions:

You must have a valid driver's license and be at least 16 years old to ride e-bikes on public roads in Rhode Island. The state defines electric bikes as bicycles with a maximum speed of 25 miles per hour (mph) with motors that produce no more than two brake horsepower.

E-bikes are not subject to the same registration and licensing requirements that apply to mopeds. Electric bikes with motors that have a power outlet of 750 watts are specifically exempt from the definition of moped.

In Washington, D.C., an electric bike is defined as a motorized vehicle as long as it has a maximum speed of 20mph, can be operated under human and motor power and has operable pedals. You must be at least 16 years old to use an e-bike — the same rules apply to both human-powered bicycles and e-bikes. Are you finally set on an electric bike but still not sure which style to choose? Whether you're looking for an efficient commuter e-bike engineered for long-range riding or a stylish all-purpose electric bike with fast speeds and a big motor, Juiced Bikes has a perfect model for every rider. to find the perfect fit today. 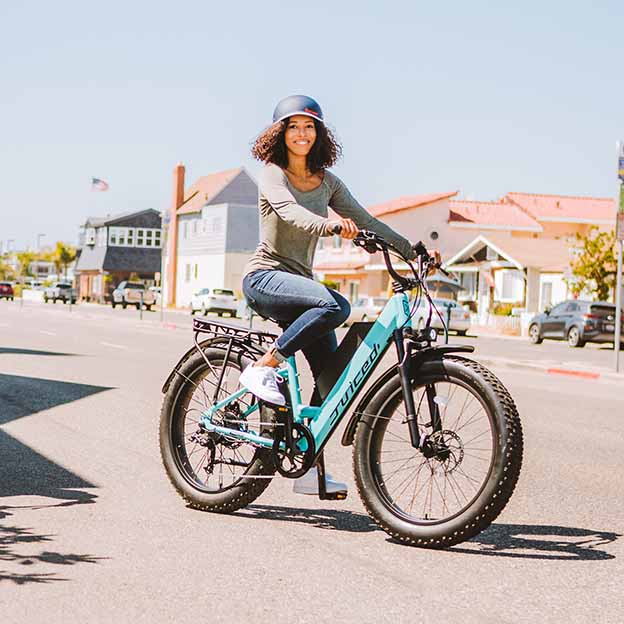