Over the last two years, millions of Americans have discovered the myriad of benefits associated with owning and riding an electric bike. Unfortunately, this surge in consumer demand has created a market for very cheap e-bikes, with very problematic (and dangerous) components. At the top of that list is the fire hazard associated with e-bike battery charging. Those fears are not totally unwarranted BUT not all e-bike batteries are dangerous. Discover what causes most e-bike battery fires and 5 super helpful tips to ensure they don't ever happen. What causes most lithium-ion battery fires?

Good batteries aren’t cheap and cheap batteries aren’t good. While there are a number of factors that can contribute to lithium-ion battery fires, the biggest one is off-brand batteries and off-brand chargers. Most high-end electric bikes, including all Juiced Bikes, feature a Battery Management System (BMS) which helps prevent the overcharging or over-discharging of the battery cells. Cheaper off-brand replacements do not feature BMS and without that, the battery cells can overcharge and possibly explode, or drain too far making it impossible for the battery to be recharged all the way. When an e-bike battery, or any lithium-ion battery, catches fire it’s extremely difficult to put out because a chemical reaction takes place. The only thing that can be done is to make sure the other bad cells don’t go into a “thermal runaway.” For this reason, it’s always recommended to purchase e-bike batteries and chargers directly from the company where you purchased your electric bike, and NEVER purchase after-market batteries from somewhere else.

Most people aren’t electrical engineers, which means you shouldn’t be servicing or tampering with an e-bike's battery. While in some parts of the country, it can be difficult to find a bike shop to service your battery, you can always get help from the manufacturer. In fact, you should ALWAYS call the manufacturer before someone else performs a battery service, if you don’t you could void your warranty. If the battery has an issue from the factory most e-bike brands will replace the battery under warranty, however, if you open the battery casing and perform a service without contacting the company’s Support Team for troubleshooting, most will not replace the battery.

Why are there so many e-bike fires in New York City?

Why are there so many battery fires in major urban areas, like New York City? In 2022, there were about 200 e-bike battery-related fires in the area according to the New York City Fire Department. So if e-bike batteries aren't that dangerous, what’s happening in New York? During the Pandemic, e-bikes grew exponentially in the city as more delivery workers were on the road and more residents wanted to get out of their apartments while maintaining social distancing. There was a huge boom in e-bike sales during this time resulting in the need for more e-bike parts and especially e-bike batteries. Of the 65,000+ delivery drivers in New York, many of them are low-income residents, so when they need a second battery or charger, they often resort to cheaper postmarket or off-brand replacements. And these delivery drivers sometimes have to get creative and share makeshift charging stations, often sharing chargers rated for different battery voltages which can lead to dangerous overheating. And if one of those batteries catches fire, it’s very difficult to stop the others charging in the same room from going into a thermal runaway. But it's not as simple as more e-bikes = more fires. This is why many proposed laws on e-bikes seem to do less to prevent fires and more to prevent people from owning e-bikes. Most proposed laws limit what kinds of e-bikes can be purchased and instead should focus on making more charging stations and storage areas for e-bikes available. The Equiptable Commute Project in NYC is doing just that and making micromobility more available to low-income frontline workers by offering 50% subsidies to New Yorkers who apply. This funding program will also advocate for safer micromobility infrastructure at a policy-level in local & state governments.

How can you prevent e-bike fires?

An e-bike fire doesn’t just happen. It's almost always caused by a cheap battery or gross negligence in battery care. By following these five steps, you can help prevent an e-bike fire. 1. Never use an off-brand or after-market replacement battery or charger. Many fires are caused by cheap high voltage options which sound great on paper but can cause major issues which you can be held liable for. If you’re unsure if a battery is safe, ASK a representative “‘is this battery UL complaint?” Purchase at your own risk if it isn’t. All Juiced Bikes are UL compliant and will include this new “stamp of approval” in 2023.

2. Always follow the manufacturer’s instructions when charging, storing and maintaining your e-bike battery.

3. Store your e-bike battery in a clean, dry and temperature-controlled environment. Don’t store your battery on or near water heaters or in direct sunlight.

4. Always contact the manufacturer directly if you’re having trouble with your battery or if the battery has been damaged. Take pictures or videos and include as much detail as possible when contacting the Support Team. Most companies will replace a faulty battery outright as long as you contact them and follow the warranty procedure, however, if you tamper with your battery before contacting the company, most will void your warranty.

5. Don’t open your battery! Leave servicing e-bike batteries for the electric engineering professionals at the e-bike manufacturer. Servicing, and replacing cells should not be done by anyone without specific training on e-bike batteries. If for some reason your battery manufacturer no longer exists then contact a reputable lithium battery service provider like FTH Power.

So, are electric bikes batteries safe? The answer depends on where you purchase your e-bike from and how you take care of your battery. If you purchase a bike with a UL-compliant battery and follow simple manufacturer guidelines on the battery, owning and operating an e-bike is just as safe as other forms of transportation.

If you already have a Juiced Bike and are looking for a second battery, don’t miss out on our G2 Battery Sale going on now. If you don’t already own an e-bike, check out our line of high-performance and UL-compliant electric bikes for the most fun, safe, and high-powered ride available.
Shop This Article 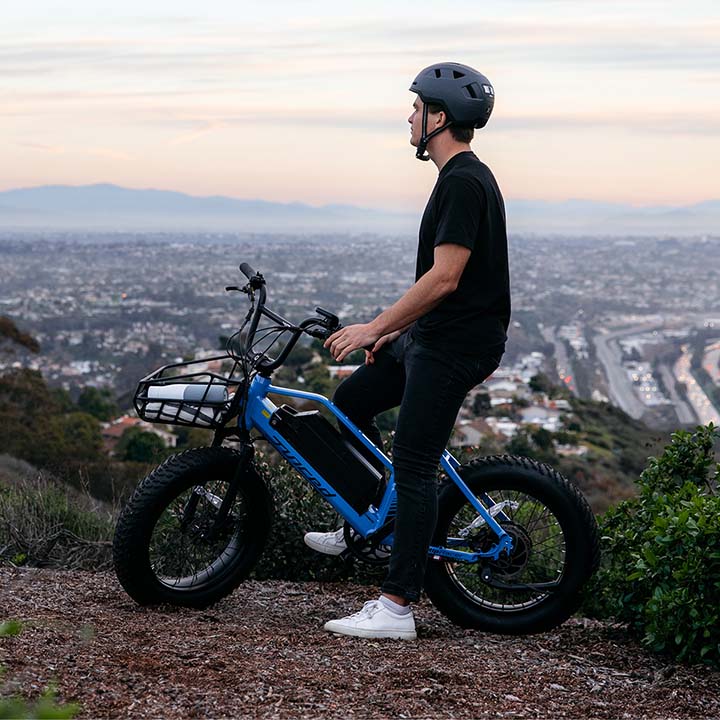