Riding With Juiced: What Does a Juiced Bike, Animal Costume Heads and the Texas State Fair All Have In Common?

In our new blog series, Riding with Juiced, we’ll be sharing the incredible and inspirational stories of Juiced Riders. From the road warriors that have redefined their lives (and livelihoods) to enthusiasts who are teaching us a lesson or two about e-bike functionality.

Sometimes e-bikes help people get to work faster, other times e-bikes help riders improve their health, but in the case of Chris Devany, Juiced Bikes were responsible for the creation of an e-bike riding ‘gang’, and in the process strengthening and growing relationships among this amazing group of traveling Texas riders.

Nearly two years ago, Chris tried her first e-bike, a CampScrambler that belonged to her good friend Thu-ha Nguyen. “After about five seconds riding her bike, I was like, ‘Welp, I gotta buy one,’” says Devany, who quickly bought the same model. “And among our friends, that experience repeated itself 14 times over. At the time, most of us lived in the Dallas-Fort Worth metroplex area. With the pandemic and the country being shut down, bike riding was one of the few things that you could responsibly do outdoors. So we did.” Devany  initially assembled group rides with those friends, because she ultimately wanted to be part of a bike gang. She found an ideal bonding opportunity at the Texas State Fair, where her group piled into a van wearing animal costume heads to take photos -- collectively and spontaneously coining themselves the ‘Vanimals’. “People were coming up to the van and asking to take pictures with us…it was such good, fun, beautiful energy with friends and strangers that we had really been missing since the pandemic started,” says Devany, who wanted the group e-bike rides to be as much about fun as it was “to show off our bitching bikes and flex in that way. So that’s when we figured out when we could all do it, and then we hit it. And we hit it hard. I think everyone should have this experience.”

She and her friend Harley JoJo Shook went on a West coast journey that went through nine states and up through the Pacific Northwest. They planned rides that included the Grand Canyon, Garden of the Gods in Colorado, and other highlights. “We planned rides but also gave ourselves the flexibility for side trips,” she says. “For example, we were driving through Utah and came across stunning vistas. So I got onto Google and searched for scenic bike trails near me. We found one within 16 miles, so we just turned off and went to do it. So it’s a little column A and a little column B. Sometimes we schedule it, and sometimes we give ourselves the freedom of discovering something.” She hopes her next bike travel ride will be in upstate New York. “The mountains there are absolutely gorgeous,” she says. “There are so many beautiful trails out there that I have walked or taken my analog bike on. And I also want to visit the Appalachian mountains on my bike, and the Muir Woods north of San Francisco would be cool. I would love to have some pictures of my bike dwarfed by the redwoods.” Before moving to New York in September, Devany’s friends, including Nguyen and Shook, organized one big ride together in downtown Dallas and the Arts District. They had 7 riders on Scramblers and Devany recalls one of her favorite moments from the ride. “We were riding from Oak Cliff to Oak Lawn (in Dallas) and passed a guy and his little girl while riding on a bike/walking path. We were cruising pretty slowly, single file, super cool. This little girl's head kept sweeping left and right as we passed by and as Thu-ha brought up the rear, the little girl pointed and exclaimed, ‘LOOK! It's a REAL bike gang!’ I was like, ‘YES! YES WE ARE! VANIMALS FOREVER!’” Everywhere the group has traveled, onlookers have asked questions about the bikes. So much so that Devany finally slapped a QR code sticker on her bike that goes directly to the Juiced Bikes CampScrambler page. “I will and can talk about these bikes forever,” she says. “It’s ad nauseam, you know, because I love it and am enthusiastic about it.” She’s also decked out her bike with state stickers of everywhere she’s put her wheels to the dirt. Now overflowing with those stickers, her bike has ridden in 11 different states with friends and 9 solo. She looks forward to her friends coming out to visit for the Holidays so she can add even more!

By the way, you can follow her travels: Devany perpetually posts photos of her bike, bike trips and friends’ bikes all over Instagram. There’s a lot to see, as she’s already ridden her CampScrambler more than 1,600 miles. Wanna start your own bike gang? Check out our full collection of e-bikes for all the friends in your life!
Shop This Article 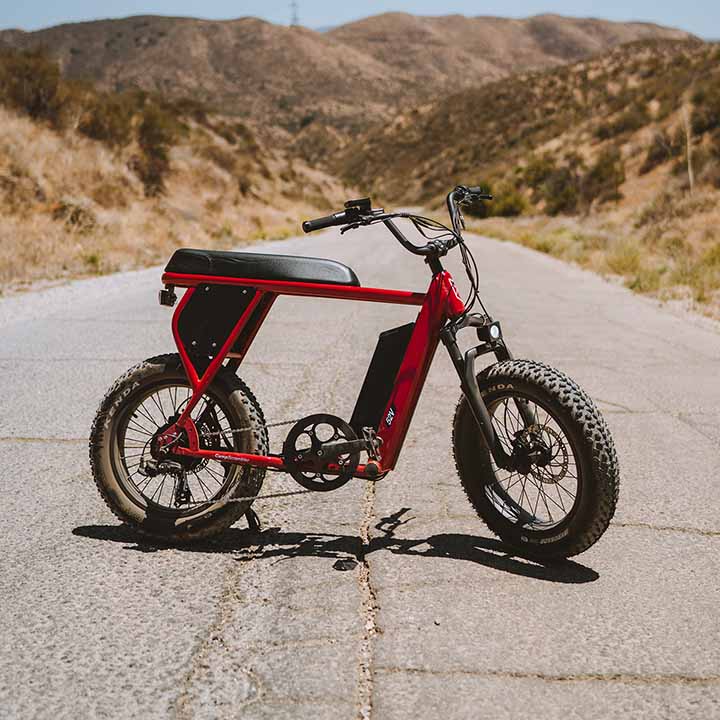