In the U.S., cars are the most common way to get around, and bikes are typically viewed as a recreational alternative, or an exercise tool, rather than a functional mode of everyday transportation. But e-bikes are changing that perception from coast to coast. With their impressive battery, electric bikes are being used more and more as an alternative to cars when it comes to commuting to work, picking up groceries, and even delivering goods and services – common duties for bicycles in many other locations around the world. Of course, it’s important that you can still have fun on your bike when the work is done too.

One category of e-bike that has become a universal favorite among American riders is the “fat tire” e-bike. Essentially, it’s the SUV of e-bikes; stout, strong, speedy and extremely versatile. like There are dozens of options in this e-bike class, but two of the best-selling and most popular are the Juiced Bikes RipCurrent S and the Aventon Aventure. Both bikes feature full-size frames, a Class III top assist speed of 28 miles per hour, thumb throttles and large, 26-inch wheels fitted with 4-inch wide knobby tires that can enable riders to surmount on-road and off-road obstacles. But look closer, and some key differences stand out.

One of the most important factors when picking out an e-bike is battery capacity, especially if the bike is going to be put to work. The RipCurrent S features a massive 998 watt-hour battery, which powers a riding range of 75+ miles on a single charge. The Aventure can only manage about 45 miles from its 720 Watt-hour power source. Loading up either bike with cargo decreases range, so it’s always best to pick a model with as much range and capacity as possible. Also, the RipCurrent S’s 1,000-watt motor is more powerful than the Aventon’s 750 Watts motor. So more battery capacity & more motor power means better hill climbs and longer riding distances. The RipCuurent S also offers a more useful nine-speed gear set instead of the Aventure’s eight speeds.

Next, if you plan to use the e-bike as transportation, you’re going to need racks to carry your gear, and on soggy days, fenders to keep the puddles at bay. Those fat tires throw a lot of rain and mud on rainy days; fortunately, the RipCurrent S also includes a rear rack with pannier rails with full fenders front and rear, all standard at no extra charge. Blasting through puddles is fun until you find yourself covered in muck, but you’ll need to pay hundreds of dollars extra to bring the Aventon up to the same level of equipment as the RipCurrent S.

Finally, how an e-bike works for you in terms of pedal assist is important for safety, control and comfort. The competition uses an older cadence device to meter out power while the Juiced model combines both cadence tech and the more accurate torque sensor typically found only on much more expensive e-bikes. Using both sensors, the RipCurrent S measures pedal effort and rotational information over 1,000 times per second for smooth, transparent motor engagement with no sudden surges or delays in assist when you start pedaling. With 1,000 watts of power on tap, the power must be delivered in a controlled, precise manner, no matter the situation.

With superior technology, more standard accessories and a larger battery for extended range, the Juiced Bikes RipCurrent S is a great value and best of all, it’s capable of filling in for your car. And when the work is done, the powerful RipCurrent S is also ready to play as well. 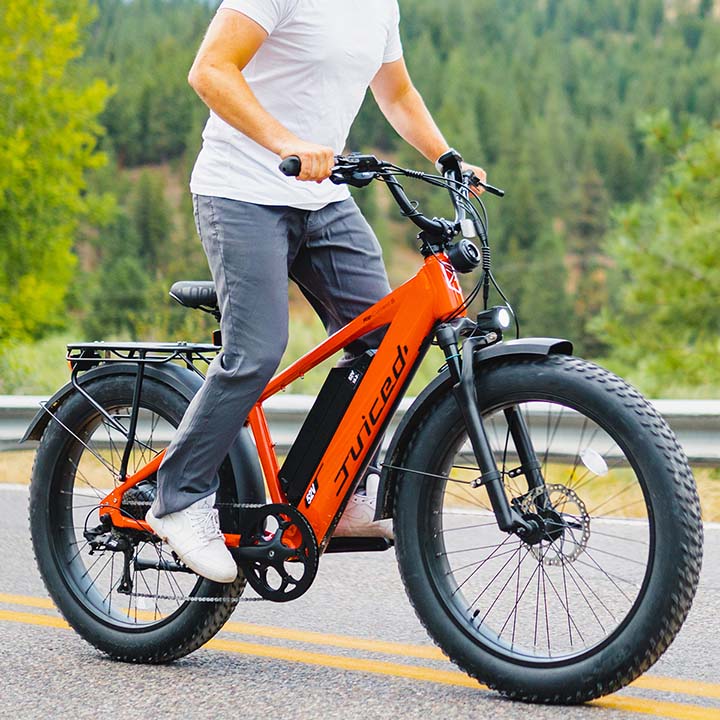