For many Juiced riders, their e-bikes provide a blank canvas to express their unique style and individuality. From adding thousands of colorful lights to building a sidecar for pets, we’ve seen some incredibly creative customizations over the last 13 years. While there are likely mods out there that we haven’t even discovered yet, here are 5 of the most inspired, capturing both our attention and admiration!

For rider Chris Devany, it was a Tiffany-blue water bottle that inspired the accent color for her beloved Scrambler e-bike. She had already begun modding with taller handlebars, a phone mount and leather tie-downs for the rear rack when she impulsively bought the bright blue bottle. “Right then, I knew THAT was the color for ZFG (the name of my bike). Once I had a color, I had to start painting everything I could to match…but not too much, because it is an accent color. And BOOM! The rims, the pedals, the bell, and the racing panels were painted.” The New York City rider says she’s most proud of the painted rims she did on her own. “I had no idea what I was doing, I just saw in my head how I wanted it to look. So, I went for it! It took 3 days to paint them, being patient was SO hard. But worth it. “ Our favorite part of Chris’s electric bike? The Rosie the Riveter race plate. Light Up the Lane

You’ll DEFINITELY see rider Chris Pixely coming down the road on his modded Scorpion X. This Southern California rider, who originally started adding lights to his bike for safety, now has over 2,000 programmable LEDs with more on the way! He’s also added a 100 Watt loud speaker with siren, cupholder, JBL music speaker, phone holder and upgraded pedals to his ride. Chris, along with his wife and 10 other riders, started an LED Bike Club called the Lit Riderz. “Now we're on a mission to inspire others to live their best life and join us in the biking community,” he says. Chris participates in numerous light parades from downtown LA to San Diego and says he loves night rides with his Scorpion because of the colorful atmosphere and bumpin’ music. It’s not everyday you see a Golden Doodle riding in an e-bike sidecar, but when you do see the adorable Miss Emi riding, it’s impossible not to smile! ! RipCurrent S rider Bee Thao built a black sidecar for his dog so she could always ride with him, wherever and whenever! The sidecar features a purple seat and Emi-sized seatbelt, white racing stripes, a windshield, miniature steering wheel, white-rimmed wheels, and of course it matches his Juiced bike. The Wisconsin rider says they always get stopped by strangers who insist on taking pictures while he and Emi are cruising around…and we can see why! Father-son duo Shane and Keith Baird ride  together on their custom HyperScrambler 2 e-bikes whenever possible. Shane, dubbed “the e-bike cowboy,” said they started modding their bikes to match their style and to add more comfort for riding on desert terrain. They first swapped out their tires for Shinko 244s and that was just the start of more mods to come. From there, Shane added a custom white seat, white raceplates, red rear shocks for even more cushion, red pedals, red grips and a red crossbar to hold accessories. Keith’s bike has similar mods to his sons but has a silver and red color combo. We love it when families share in the joy of riding (and modding) e-bikes together! You can check out the father & son’s mods on their YouTube channel  where they teach other riders how to customize their bikes. Derek Monroe realized the potential for mods while shopping for his first e-bike. “The Juiced Scrambler is crazy cool. I saw that and was like, I love this bike and I am sure I could do so many things to this to dial it in to be where I want it to be for myself.” He fully customized his Scrambler with his own unique style including a fiesta-inspired seat, vintage cafe cruiser headlight, checkered race plates, red grips, green pedals, blue tires, and a custom rear rack. When he rides around his hometown in Santa Barbara, Calif. the colorful mods get many double-takes as he cruises by cars and riders alike on his way into work. We love to celebrate our rider’s creativity and these five riders are e-bike artists! Ready to start customizing your own Juiced Bike? Be sure to tag us on Instagram to share your mods with us or submit your own photo here.
Shop This Article 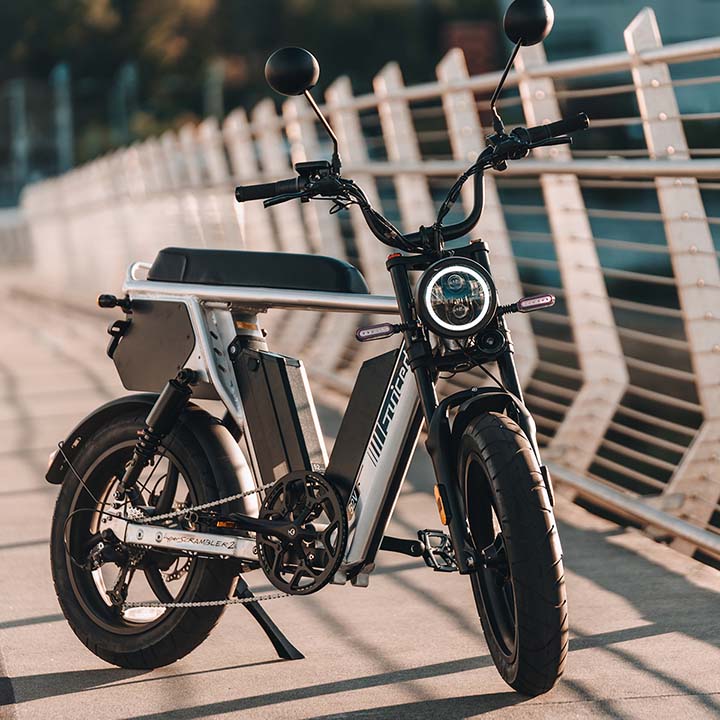